We and selected partners use cookies or similar technologies to ensure you get the best experience on the Teamtailor website. With respect to cookies that are not considered necessary (as specified in the Cookie Policy), we and our selected partners may use cookies for the following purposes: personalized website experience, develop and improve products and in some cases targeted advertisement that are based on your interests. You can manage or disable cookies by clicking on "Manage cookies" at the bottom of each website page.

These cookies are required and must be accepted to use this site.

These cookies are used to deliver adverts more relevant to you and your interests.

We have received many questions over the years regarding our internships: How can I get an internship at Fall Damage? What does it mean to be an intern? And what can I expect to learn from it? 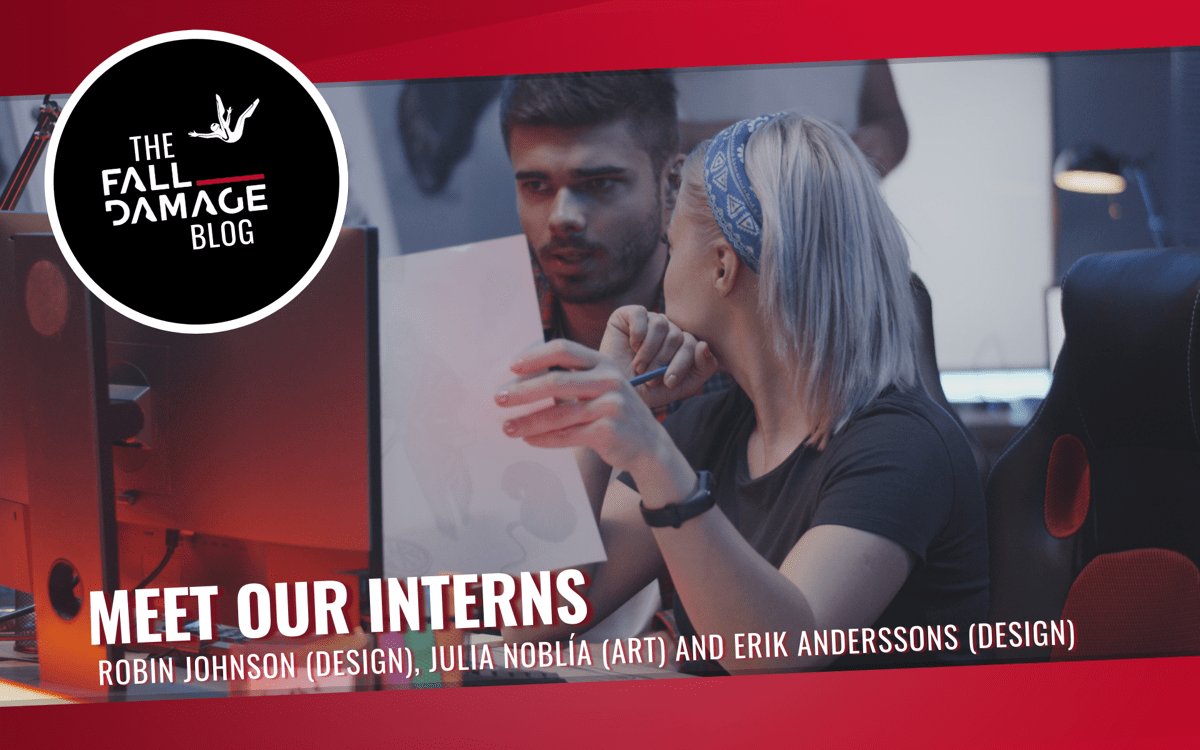 With this post, we want to answer some of these questions, while also getting an opportunity to show off our current interns (and soon-to-be full-time employees) who are doing a marvelous job. Take it away, Robin Johnson, Julia Noblía, and Erik Anderssons:

My name is Robin, but I’m usually called Bobban (there were one too many Robins in my class in middle school) and I am a kennel assistant turned game designer, and have been studying game development since 2016. At Fall Damage, I’m a technical design intern. 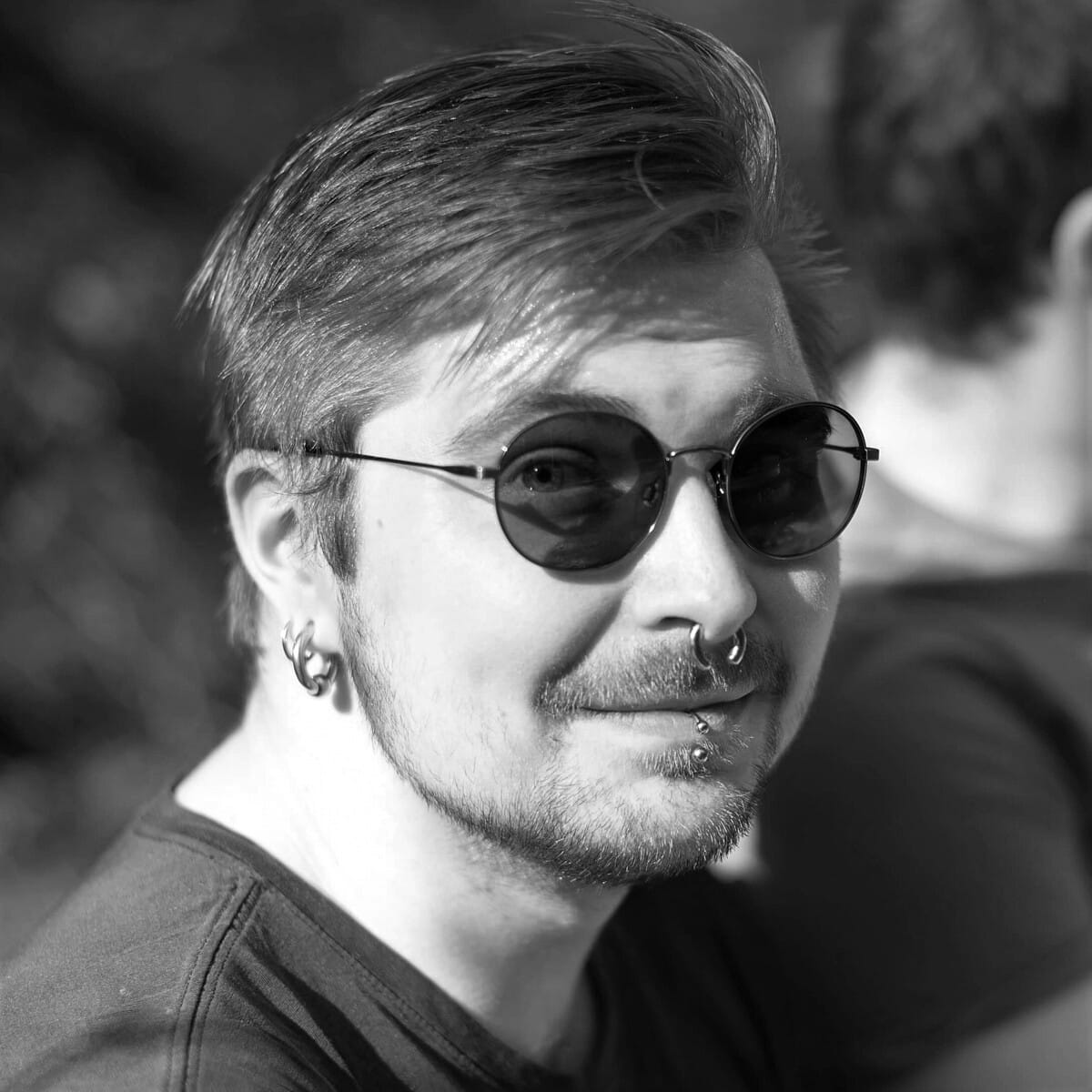 I’ve been playing and collecting games for as long as I can remember. I would often drop by second-hand shops to buy old and weird retro games. It all culminated in me playing a game I didn’t enjoy and asking “why” I didn’t enjoy it. Since then I’ve become more and more analytical and curious about how games are made!

I am currently studying game design at Futuregames where I am focusing on scripting and prototyping. I wanted to study game design to explore how and why we interact with games, and how we can expand these interactions to create more memorable experiences.

My name is Julia and I’m an VFX artist intern here at Fall Damage. For the last nine years I’ve been working as a salesperson for a cosmetics company, at the same time as studying everything from arts to maths trying to find my thing. Since 2018 I've studied game development. It has by far, out of all the things I've studied, been the most fun and challenging.

One of my first memories of gaming was when I was a kid, and my dad and my uncle used to play Quake. We shut the blinds, and in the completely dark apartment me and my sister sat beside and cheered. During a long (way too long) period of my childhood I made that jump sound every time I got up on something. I haven't been a huge gamer, but like a lot of people my age it has been a part of my life in one way or the other.

I’m currently studying 3D graphics at Futuregames, focusing on VFX. I’ve always been interested in creating, though it wasn’t before studying games that I found digital media.

My name is Erik, I’m 24 years old and currently a technical design intern at Fall Damage. I’m the type of person who’s always on the look for interesting puzzles and problems to solve, and over-engineers the simplest household things. I also like discussing everyday topics on a philosophical level, like how and why things are the way they are.

As a child, I was introduced to several old school games, such as Pinball, Game & Watch, and Tetris. One day I received a Gameboy, and it was the most amazing thing I had ever seen. My family used to travel a lot, and in some of the countries we went to, they had some less legitimate game vendors that sold “100 in 1” cartridges, and I thought that was the best deal ever, I would try out each game one by one and go back to the ones I liked the most. I think that contributed a lot to my varied interest in genres of games.

I am currently studying game design at Futuregames. I think it all started with thinking of how I wanted to improve games that I played when I was young, and while thinking of how to change other games is a good thing, designing my games seemed even better, so I decided to pursue a career in it.

HOW DID YOU GET A INTERNSHIP AT FALL DAMAGE?

Bobban: For me, it was a bit of a chance meeting where I got to grab a canceled interview spot and do a design work test. I had also heard from a friend at Fall Damage that it is a great place to work and grow in, so it only felt natural to push for an internship here!

Julia: I managed to book a meeting at the Meet and Greet arranged by my school. It was quite a hectic day, and I met a lot of nice people, but Fall Damage was one of the companies I found most sympathetic. They really took the time to get to know me and let me take my time to get to know who they were, even though there were a lot of people wanting to meet with them. We got to chit-chat and look at my portfolio and it didn’t feel stressed. For me, that made me feel they care about who they’re taking into the team. I was over the moon when I was offered an internship here.

Erik: I was recommended to apply by a very nice friend of mine, who suggested to the team that they should interview me. I was brought in at the very end of the recruitment process, which meant that I interviewed on a Friday and only had until Monday to finish my work test. So I got to work with throwing together a project in Unreal. On Monday, they interviewed me again regarding the work test and seemed pleased enough to offer me an internship!

WHAT HAVE YOU DONE AT FALL DAMAGE THIS FAR?

Bobban : I have done a lot of secret stuff! But what I can tell you is that I have mostly worked on rebuilding and changing existing features in the game, as well as some bug fixing. I have also made some prototypes meant to help us experiment with our current gameplay.

It has been a lot of fun to work in a real game development environment, and to focus on tasks and collaborate with teammates. Getting into network scripting was less overwhelming than I anticipated, but it was still a challenge to get into the right mindset for that kind of logic. But throughout, it has been a priceless learning experience!

Julia: The booms and the pew pews! I’ve learned so much. Both techniques for doing VFX and how it is to work in a bigger team.

The most fun about this internship has also been the most challenging, at least when it comes to problem solving. Also, to feel welcomed by a team that I, at least the majority, haven’t met in person since we’ve been remote because of Covid-19. I genuinely like my co-workers. That’s something you don’t always get to experience.

Erik: I have been working on both iterating on the mechanics in the current game in production, prototyping new mechanics and features for the game, and balancing various aspects of the game, as well as participating in discussions about how the game should work.

The most fun part has been learning new things! Although getting into the workflow of things here has been challenging, it’s also very rewarding once you learn how things work, and can start working on your own without needing to ask a ton of questions.

AND FINALLY, WHAT ARE YOUR AMBITIONS FOR THE FUTURE?

Bobban: For short-term goals, I want to keep working on my skills both as a technical designer and as a game designer. At some point, it would be fun to start working on personal projects where I can experiment with some fun and weird ideas I have. I’m also looking forward to having a game published so that there is something out there I can point to and say “I’ve worked on this''

Julia: This has been my goal for a couple of years now, and I’m still settling into it (like, I get to work with my hobby every day?!). But I want to grow my skill set, that’s at least a short-term goal. And as Bobban mentioned - I'm also really looking forward to having been a part of creating a published product.

Erik: One day I’d like to bring a project, that I’ve been conceptualizing for a long time, to life. But that might be something I work on in my spare time. As for jobs, I love working on all kinds of different games, I’ve made many games in many different genres and they have all been very enjoyable to make.

Fall Damage not having a specific genre of games they are known to work on means the potential variation in projects could keep work varied and interesting for a long time, which makes me very happy to be here.

At Fall Damage, we are always thrilled to get in contact with passionate people at the beginning of their careers. However, we are still a small studio and we lack the capacity to bring in as many interns as we would have liked. Thus, we will not bring in any new interns this year (2021).

If you want to stay up to date with upcoming internships and other opportunities at Fall Damage, please connect with us here.